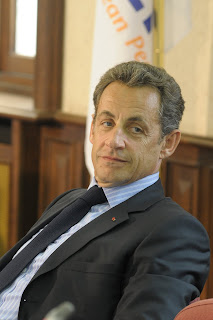 Photo courtesy of European People's Party
I generally make no secret about my distaste for the President of the French Republic, M. Sarkozy, a distaste I hold for a great many reasons. However, this gaffe takes the cake:

French President Nicolas Sarkozy has caused outrage by suggesting that the Alsace region which his country won back from the Nazis after World War II was still ‘in Germany’.

The French President made the hugely embarrassing mistake during a speech in the Alsatian town of Truchtersheim, which is less than 20 miles from the German border...

‘I’m not saying that simply because I’m in Germany,’ he continued, before correcting himself to say: ‘I’m in Alsace.’

The crowd immediately began jeering and then booing Mr Sarkozy, who appeared shocked by what he had said – putting his hands up in the air as if surrender.

Alsace, historically one of the most strategically crucial regions in France, was contested constantly between France and Germany during the 19th and 20th Century.

I don't necessarily wish here to go into a rant regarding "foreigners" or such, for indeed I greatly enjoy the rich and diverse cultures of other lands. But I do have a great animus for "rootless cosmopolitans," those who will carpetbag about seeking a comfortable enough place to hang their hats, then, without any regard for the shared common loves of the people of that place, seek to make it into their own little socially-engineered utopia. Nicolas Sarkozy is not very French, and this gaffe shows how un-French he is, not even knowing enough about the country he purportedly governs to know that Alsace is French, not German. What an insult to those men who honourably served that Alsace may remain a part of the great French realm! My family has not lived in the Hexagon for generations, yet even I am heartily affronted by this.

As though we needed yet another case proving that mass elections are an excuse for large-scale fraud and pandering. Those elected often set themselves against the nation they purport to serve, make no attempt to share in the nation's customs and traditions, often leading many to believe that they actively stand against their supposed fellow-citizens. Sarkozy is terrible in this regard; Obama is worse. Great nations deserve great leaders, and, honestly, Western world, we can do better. Monarchs still reign, but with little power; many other royal families have lost their thrones but remain waiting in the wings should they ever be called upon again. Frankly, what have we to lose in calling upon them? Indeed, the situation as it stands cannot get much worse. Even a bad monarch was much more a Frenchman, or an Englishman, or what have you, than the internationalist carpetbaggers ruling today. For the sake of our continuing identity and survival, give them a chance.

This one's dedicated to you, Monsieur le Président: