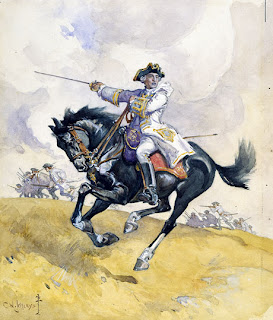 The Mad Monarchist speaks about the great hero of New France:

Upon his arrival, Montcalm was less than impressed with the situation in New France. There was not much that was up to his high standards and although he was polite and diplomatic with his Indian allies he also abhorred their methods of making war. He squabbled with the local governor and received precious little support from the homeland. Yet, the Marquis brought a new sense of professionalism to the French war effort in America and against all odds he won a string of stunning victories over the British. Despite being heavily outnumbered the Marquis de Montcalm took the offensive and began methodically reducing the British presence in upper New York. In 1756 he won a great victory that secured French control of Ontario with the capture of Fort Oswego. The devout Marquis credited God with the victory and erected a memorial cross in thanks. The following year his skillful siege tactics resulted in the capture of Fort William Henry, a name perhaps most famous for the Indian massacre of British soldiers and civilians who had evacuated the fort. Much blame has been heaped on Montcalm for this but, in fact, he never ordered such an atrocity, was horrified when he learned of it and acted quickly to stop the killings even to the extent of offering his own life in exchange for the parolees.

It was, however, the battle of Fort Carillon in 1758 that was to be the masterpiece of Montcalm’s military career. With only 3,800 men he successfully repelled a British army of over 16,000. The British lost 2,000 men killed or wounded while the Marquis lost only 352. Again, Montcalm attributed the victory to God and erected another memorial cross in thanks for their deliverance. It was the height of French war effort in North America and the height of the career of the Marquis. Despite being at every disadvantage, the French had not only defeated the British campaigns against them but struck back to the point that the very presence of the British in America was imperiled. However, stirred to action, things soon changed as the British sent over massive reinforcements from the home islands with the intention of wiping out the French presence in Canada once and for all.