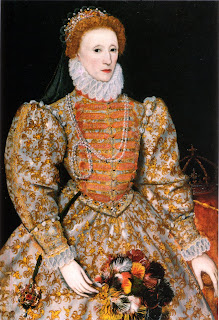 On January 15, 1559, Bloody Elizabeth (am I incidentally the only one who believes the cocktail should be renamed?) was crowned Queen of England. Her reign took England definitively out of the Catholic sphere, culminating in her excommunication by Pope Pius V, her weathering of the attack of the Spanish Armada, and her slaying of large numbers of Catholics in her realm, among them her cousin and heiress presumptive, Mary, Queen of Scots.

Exactly 451 years after that, the Personal Ordinariate of Our Lady of Walsingham was canonically erected better to allow for the reunion with the Holy See of Anglicans disaffected with the established Church of England. Three former Anglican bishops were ordained priests.

Anglican Father Hunwicke describes the ethos of the first Mass of Father Andrew Burnham, formerly Bishop of Ebbsfleet, as follows:

Fr Aidan returned, today, to the great enterprise of gathering up the fragments that none be lost; of appropriating, for the good of all the church, the Anglican inheritance discerned through the purifying prism of Catholic Orthodoxy. He mentioned that Bishop Andrew is engaged in the liturgical side of that - but made clear, referring especially to Blessed John Henry and the Tractarian Fathers, that there is much more to it than Liturgy. His homily, I think, counts as the Programmatic Statement of the Ordinariate as far as theology is concerned. I hope he stays involved.

If Fr Aidan's homily was characteristic, so was Bishop Andrew's liturgy. Fine music (Byrd; Morales); Latin from the Sursum corda until the Communion. We had examples of what the American blogosphere now calls Common Sense and Mutual Enrichment. Sanctus covered the (silent) first half of the Canon Romanus and Benedictus the second half; we were spared those horrid 'Acclamations' after the Consecration. At the Invitation to Communion, Bishop Andrew continued his custom of using the New ICEL translation of Ecce Agnus Dei. More here.

All in all, an excellent start on a very auspicious date. Et Lux in Tenebris Lucet extends its congratulations and its promise of prayers to the new ordinands and to all crossing the Tiber into this new ordinariate. May your rich theology and liturgy, picking up the mantle of Blessed John Henry Newman, come to enrich us all.
Posted by Le Barde Gaulois at 9:53 PM