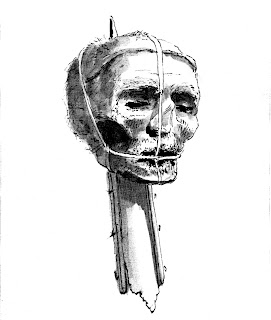 Cromwell's body, hidden in the wall of the middle aisle of Henry VII Lady Chapel, took effort to exhume because the wood and cloth were difficult to shift. On 28 January 1661, the bodies of Cromwell and Ireton were taken to the Red Lion Inn in Holborn, joined the following day by the body of John Bradshaw, before being taken to Tyburn for execution. On the morning of 30 January 1661, the anniversary of the execution of King Charles I, the shrouded bodies in open coffins were dragged on a sledge through the streets of London to the gallows, where each body was hanged in full public view until around four o'clock that afternoon. After being taken down, Cromwell's head was severed with eight blows, placed on a wooden spike on a 20-foot (6.1 m) pole, and raised above Westminster Hall.

In the town of Hadley, Mass., are believed to be buried two of Cromwell's associates in the murder of King Charles I. This is not far from me, and often I've spoken with friends there about attempting to find the graves of William Goffe and Edward Whalley, who also signed the king's death warrant and took refuge in Hadley, that the public justice due a regicide may be meted, just as it was in Cromwell's case. That plan, however, never really got beyond a pub conversation.

Whalley and Goffe sailed from England as soon as possible. They arrived in Boston in July, 1660, and they lived there openly under assumed names. In August of that same year, Charles II issued a royal writ for their arrest and execution, the man-of-war bearing these warrants set sail for Boston. Friends of the two regicides found out and secretly chartered a fast sloop by which to send a warning. The sloop over took the King's man-of-war just off Cape Ann, pressed on to Boston Harbor where it arrived too late to reach the city that night. The ship's captain, taking his mission very seriously, manned his small boat with his strongest men and rowed to shore. Governor Endicott was having a party for the two regicides that very evening at the State House. The captain, still dressed in his seaman's clothes, refused to be turned away from the door, arguing his case at length. Governor Endicott overheard the discussion and listened to the captain's message. Realizing that Goffe and Whalley were facing apprehension, the governor ended the reception and sent the two men out of Boston that very night. From 1661-1664, the two fugitives were housed in and around New Haven and Milford, Connecticut. When the King's men started looking for them in Connecticut, Whalley and Goffe decided to hide out at the back of beyond, in the small settlement of Hadley. Reverend John Russell hid them in his house in the center of the village until Whalley's death in ca. 1674 and Goffe's death some time around 1680. Although a few trusted people knew the two men were secretly hidden in Hadley, everyone involved kept the secret because if the truth were revealed, John Russell as well as the two fugitives would face death.

More about these regicides and the legend of the "Angel of Hadley" bound up with them can be found here.

God save the King.
Posted by Le Barde Gaulois at 10:04 PM