On the eve of the feast of the revolution, let us pause to remember the chiefs of the Royal and Catholic Army.

Sacred Heart of Jesus, have mercy on us.
Martyrs of the Vendée, pray for us.
Vive le Roi.
Posted by Le Barde Gaulois at 8:00 PM No comments:

An open letter to HM The King of Spain

It gives me great honour to greet you from Massachusetts across the ocean. Sire, long have I had a certain affection for your fair realm of Spain; how can one who professes the Cathoic faith not? Spain, the last Crusader kingdom, hard won from the Moors, deserves my double gratitude as a Catholic in the Americas of Western European descent, for it was your kingdom, Sire, that both evangelised much of the New World in which I reside, and denied the Mediterranean and thus our homelands to the Turks at Lepanto, thus preserving our unique Catholic cultures, which have been of such great benefit throughout the world. On a more personal note, I am of French descent, and thus my ancestors were privileged to serve many of your ancestors in that great realm, such as St. Louis IX, Henri IV, and Louis XIV.

Nevertheless, Sire, certain matters in Spain, and throughout the Western world, are causing great concern to me and to Catholics and monarchists of good will the world over. No doubt your loyal subjects and the hierarchy of the Church have already addressed such petitions to you. Nonetheless, as one who is quite proud that one of the greatest nations of Christendom remains a monarchy, moreover one reigned by a descendant of the kings who reigned over my ancestors, I hope I am not forward in addressing this letter to you, Sire.

I speak, Your Majesty, of your socialist government, the most prominent in Europe since the demise of Great Britain's Labour government, and its blatant incongruence with and even hostility toward Spain's proud national and Catholic traditions of which you as sovereign are protector. Three recent items of news have I read with shock: the lack of the customary military salute to the Blessed Sacrament on Corpus Christi; the banning of the great national spectacle of bullfighting in the autonomous region of Catalonia; and Your Majesty's royal assent to the law broadening the availability of abortion in Spain.

Regarding the last point I shan't spill much ink, as I'm certain that the episcopate in Spain has already made the errors of this law well known. Nevertheless, Sire, your royal peers in Belgium and Luxembourg, both Catholic Kings, have refused assent to legislative actions that were similarly contrary to Catholic doctrine. That their respective parliaments managed to circumvent the customary requirement of royal assent to promulgate the law in question is a moot point; what is relevant is that the conduct of the King of the Belgians and the Grand Duke of Luxembourg could be in no way impugned by the faithful and clergy of their nations in what concerns these laws.

Indeed, Sire, I would be remiss and unjust if I did not plead ignorance in relation to what transpired internally concerning this act. Well I do know, however, that the great majority of socialists are very much opposed to the institution of monarchy, and whether a modest placation of them be necessary in order to preserve Spain a kingdom is a debatable point. Even still, this event in the context of other actions of the Zapatero government gives me ample pause.

The law in Catalonia, as well as the growing movement to abolish the corrida in Spain, likewise present a troubling development. To a foreigner, likely the first image to come to mind when Spain is mentioned is that of a brave man in a baroque outfit using a red cape to induce a ton or more of untrammeled beast to pass as near to him as possible without goring him. As baseball is to Americans, or sumo to Japanese, the bullfight is more than a national sport; it is part of the national character. Though it may be couched in the terminology of prevention of cruelty to animals, as was the movement against fox hunting and other country sports in Britain, it can in the end be little more than an attack against the traditions of Spain, and against those who remain most proudly your Spanish subjects, rather than a rootless, "Europhile" cosmopolitan "élite," so seen throughout the continent nowadays (and with so many likewise in the States, I may add).

This group, Sire, has seized power in Spain once before. However, the first time around, there was no UN or EU to extirpate national and local cultures and peculiarities. There was, however, the Comintern. 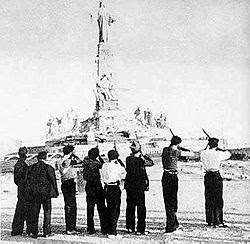 You have certainly seen the statistics of the numbers who fell during the tragic war of 1936-1939: 6,832 priests, about 20% of all clergy in Spain, and many others merely for practicing the Catholic faith. Many of these have since been beatified by the Church, those martyrs, ruthlessly cut down for failure to assimilate to a "revolutionary" mode of thinking, and a reminder that there are traditions in this nation which will not simply vanish overnight. Such is often the basis of the psychology of these socialists: custom, be it religious or secular, prevents the unbridled will of those few partisans of a novelty from being imposed massively upon society. Thus, those who maintain most robustly these customs and traditions must be extirpated. As Voltaire said, "écrasez l'infame."

I know this personally, for my French lineage is heavily Vendéen, from that loyal province that famously refused to submit to the New Order imposed upon France by the Jacobins, and fought a guerilla war, taking heavy casualties and suffering what is debatably the first genocide of modernity, all for their robust defense of their national traditions against the iconoclasm of the republicans. Primary among these were the defense of the liberty of the Church and its honoured role in society, and the defense of the right to reign of the deposed king Louis XVI, and after his execution, his son Louis XVII, both your kinsmen. Those who hold to a traditionally ordered society are always among the first to defend the rights of monarchs, for monarchs defend these customs against those who seek to impose a new Promethean order upon society. And, indeed, these Prometheans seek nothing more than the regime of Cromwell in England, that of Robespierre in France, or that of Lenin in Russia. Such is what the nationalists in your nation's civil war fought for, and it is due to their victory that you rule Spain today.

Thus, as a lover of Spain, a faithful Catholic, and a monarchist, I plea to you, Sire, let not your nation's noble peculiarities be swept away by those who desire to recreate society in their own rather flat image. Those who resist them are few, and often seen as eccentric, perhaps, to cite your nation's greatest literary creation, quixotic. Nonetheless, Your Majesty, you will scarcely be alone, either in Spain or abroad. Should you show yourself a true son of St. Louis, a great successor to the Catholic Monarchs and Philip II, and resist those who would destroy your glorious nation with its rich history and its rich tradition of Catholicism, I pledge upon my honour to aid you in whichever way that I can. I am sure that there are many more who would do so, from the Vatican on down to the humblest village.

I shall offer this evening a rosary for you and your nation.

I am honoured to remain your humble servant,
Matthew Palardy
Posted by Le Barde Gaulois at 5:17 PM 6 comments: