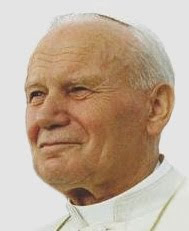 The beatification shall take place on May 1.

I've noted that many liturgically minded people have lately come to disparage the pontificate of John Paul II as not traditional enough, or as the same "Spirit of Vatican II" but this time with a veneer of doctrinal orthodoxy. These critics, however, fail to appreciate the profound difference between the situation he inherited from Paul VI and John Paul I and the situation he passed on to Benedict XVI. Does anyone under the age of 60 buy liberation theology as a reflection of authentic Catholic doctrine any longer? No? Then thank John Paul for it. And then while you're at it, thank him for tearing down the Iron Curtain and ending Communism in Europe, or is your memory so short as to forget this?

(UPDATE: Further information regarding the conflict between the Soviet bloc and the Church during the Wojtyla pontificate may be found here.)

I'll be frank; I didn't like much of what I saw in the John Paul years, like the Assisi meetings--do we really need another one?--the Piero Marini designed liturgies, and the prominence of such self-aggrandizing shysters as the Legion of Christ and those pushing the Medjugorje apparitions. I was a teenager in the 1990s, and saw many of the Church's attempts to appeal to young people in that day as crass and pandering, whether they were Life-Teen rock concerts or mellow Kum-Ba-Yah-singing sessions that felt more like motivational speaking or group therapy than divine worship. I was very private then as I'm private now (is this not the lengthiest digression about myself that I've made on these pages yet?) and was quite unwilling to speak about my inmost feelings to perfect strangers, let alone usually even close friends or family; such are known but to God. Moreover, others being so personal with me was rather affronting, and I could barely wait to return home to sit by candlelight in a darkened room and listen to the chant album of the monks of Santo Domingo de Silos, which was very popular at the time, wondering why, if this was religious chant, why were we dealing with guitars, tambourines, and maracas at Mass?

I digress in this manner only to cite the fact that I had significant problems growing up Catholic in the John Paul era, but one thing strongly impressed on me is that there actually is a doctrine of faith, not some hodgepodge slapdash nihilistic egalitarianism of ideas that so many seemed to hold to. Even if the orthodoxy presented me in my youth was often quite minimal, it was still orthodox, and by no means did the minimalism of its presentation preclude me from further study. The kernel of Catholic truth reached the world ever more broadly under the aggiornamento of Pope John Paul II; now it is putting down its roots--its religious, cultural, political, and aesthetic peculiarities from the modern world--in a way that I had only dreamed of in my youth under the ressourcement of Pope Benedict (everywhere, if news is to be believed, except in my own diocese). The one must logically follow on the other, particularly after the uprooting and iconoclasm that the wake of the Council brought. To my mind, that good alone, and its logical development, outweighs all that I'd critique.

Thus, I feel a defense of the late pope is very much in order for those who would put forth critiques of his pontificate. Though I may indeed be in accord, I dare say an understanding of the context of the pontificate of John Paul II is much in order before one casts stones.