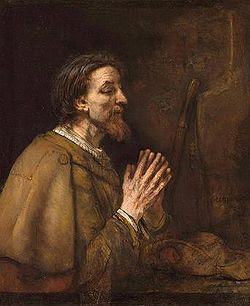 Saturday is the feast of St. James the Greater.

Son of Zebedee and brother to St. John, St. James was called with his brother from his father's fishing boat by Jesus with the promise that He would make them "fishers of men." The brothers, together with St. Peter, became like an inner group among the Apostles, witnessing the Transfiguration and going with Our Lord to Gethsamane. He was the first of the Twelve to receive the martyr's crown, a request presaged by Jesus' words upon James and John requesting that they may sit one on His right and one on His left in the kingdom of heaven, and this after He had just prophesied His passion: "You shall indeed drink of the chalice that I drink of: and with the baptism wherewith I am baptized, you shall be baptized." He was beheaded by Herod Agrippa. That is when his story begins to become quite interesting. 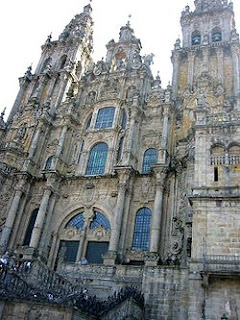 The primary place of St. James' cult is Spain, specifically Santiago de Compostela in Galicia, a place that has come to be almost synonymous with pilgrimage. To this day, hundreds of thousands come each year to the Cathedral of Santiago, festooned with the scallop shell as the mark of the pilgrim, and always walking the last 100 km (or bicycling the last 200 km), to venerate the relics of Saint James. Pious tradition relates that St. James had preached to the Celtiberians before returing to Jerusalem for his martyrdom, and that his relics were miraculously translated to Galicia by angels. Pilgrims have come to this site since the time of Charlemagne, making this one of the great and ancient traditions of Christendom. Indeed, readers, the Camino de Santiago is one of the pilgrimages I hope to undertake in my lifetime.

However, the tale of St. James scarcely ends with the establishment of the pilgrimage, for when the pilgrimage began, most of Iberia was under the rule of the Muslim Moors. It is reported that the vastly outnumbered Christian army of Ramiro I of Asturias made battle against the Moorish Emir of Córdoba in 844 near Clavijo in La Rioja, and that St. James miraculously appeared to lead the Spaniards to victory, earning him the soubriquet "Santiago Matamoros," St. James the Moor-Slayer. Thence arrived the Spanish war-cry, "¡Santiago y cierra España!" (Saint James and strike for Spain!) This war-cry was shouted as the Iberian peninsula was reconquered from the Muslims; it was uttered at sea in the Gulf of Patras where the ships of Spain and the Holy League through the intercession of the Blessed Virgin Mary defended Rome and Western Europe from Turkish invasion; it resounded as Cortés and the Amerind tribes allied to him ended Montezuma's empire and the barbaric human sacrifices therein, that Our Lady may place her image on a simple Aztec peasant's cloak, and make Spanish the native language of more Catholics today than any other language; it was heard as a Galician general routed Soviet-supported anti-clerical republicans in an attempt to preserve a Catholic Spain and a Spanish monarchy; it begat a great Catholic empire, the first on which the sun never set, giving us such great and holy saints as Teresa of Avila, John of the Cross, and Ignatius of Loyola. Therefore, we pray Santiago to lead us to victory again today, to intercede with Our Lord that the enemies of His holy Church yet again be routed, and that we may once more be that Christendom that flocked to his holy shrine in Galicia.