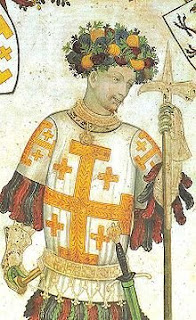 Thus conquered Godfrey, and as yet the sun
Dived not in silver waves his golden wain,
But daylight served him to the fortress won
With his victorious host to turn again,
His bloody coat he put not off, but run
To the high temple with his noble train,
And there hung up his arms, and there he bows
His knees, there prayed, and there performed his vows.

The Mad Monarchist speaks more of Godefroy de Bouillon and of the hard-fought work of Christendom, the foundation of the kingdom which the heads of nearly all Europe's princely houses claim in pretense here.
Posted by Le Barde Gaulois at 12:29 AM