I ought to begin today by providing a link based on yesterday's post. Various royal, military, and naval flags used under the French ancien régime may be found here. One will notice the very prominent use of white, particularly of the white cross, and of the fleurs-de-lys.

The tricolour flag, in present usage, was a combination of the revolutionaries' colour of red with those of Paris, white and blue. With the exception of the 15-year Bourbon Restoration (1815-1830), the tricolour has been the national flag in some form or another. During the Restoration, the flag "argent, semy 43 fleur-de-lys or" was used. The question of the flag of France became quite prominent in the early days of the Third Republic, which was devised after the defeat by the Germans at Sedan, the deposition of Napoléon III, and the civil strife caused by the communards in Paris and other cities. The election of a monarchist majority to the National Assembly in 1871 meant that the Third Republic was likely fated to be more short-lived than the four year long Second Republic of 1848-1852. After the Legitimist and Orleanist parties had come to an agreement on his succession, the National Assembly offered the crown to Henri, comte de Chambord, grandson of the last Bourbon king Charles X. Henri accepted, but on one condition: that the white flag of the Restoration be used as the national symbol and that the tricolour be retired. Needless to say, Henri never took the throne of France. Neither did any of his legitimist heirs, nor even a prince of the Orléans house. France has been a republic ever since.

Occasionally, the tricolor has been defaced with another heraldic design to symbolize a certain group, movement, or military unit. The only time a defaced tricolour was the national flag was under the Vichy Régime, which featured the fasces. However, the most famous by far was the tricolour defaced with the croix de Lorraine or patriarchal cross, used during the Second World War by the Free French Forces. This symbol derives from the arms of Lorraine and no doubt recalls Lorraine's finest daughter, Ste. Jeanne d'Arc, and her great work of pushing a foreign invader from French soil. The use of the croix de Lorraine was suggested by Georges Thierry d'Argenlieu, who became chief of staff of the Free French Naval Forces. A veteran of the First World War, Thierry d'Argenlieu became a Carmelite friar between the wars, taking the religious name Frère Louis de la Trinité. He was mobilized upon the declaration of war, fled to De Gaulle while eluding the Germans, and was given leave to serve as a fighting officer by his religious superiors due to the dearth of qualified naval officers among the Free French. Andrew Cusack relates his story here. 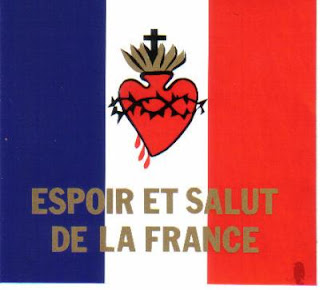 However, perhaps my favourite defaced tricolour is one presently used by traditional Catholics and by the Scouting movement in France, one that ought to be rather familiar to anyone who has undertaken the Pentecost Chartres pilgrimage. The Sacred Heart of Jesus has long been important in the Catholic Church, but perhaps nowhere more than in France. Indeed, the promotion of devotion to the Sacred Heart was one of the finest works of the French school of spirituality, and resulted in its spread throughout the entire Church. In 1899, Pope Leo XIII consecrated the entire world to the Sacred Heart of Jesus. The text on this flag, «espoir et salut de la France», means "hope and salvation of France," something indeed the Sacred Heart was in the days of its growth, when France was much troubled by the heresies of Jansenism and Gallicanism. How much more today then, when the spawns of these heresies seem triumphant! This very symbol was worn as a badge into battle by the Vendéens rebelling against the Revolution, and after them the Chouans, the Tyroleans, the Spanish Carlists, the Mexican Cristeros. Wherever one finds Catholics resisting heresy, and the anti-clericalism and brutality that invariably follow it, one will find the Sacred Heart. This majestic banner is a call to France, the eldest daughter of the Church, never to forget that day when Clovis rose from the font, the first Catholic king in a decayed empire full of Arianism, never to forget how Charles Martel fought off the Moors, never to forget how Charlemagne, after uniting almost all of Western Europe into a common Christendom, was crowned Roman Emperor by the Pope, never to forget the glorious liberation of Jerusalem. In short, that France may never forget her glorious destiny, her divine vocation, to be the defenders and promoters of the Church throughout the world, a bulwark against her enemies, omnipresent in this day and time. Sadly, like all the world, she has faltered in this. 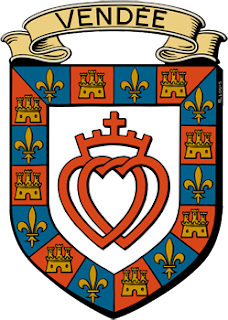 However, the present département of the Vendée has apparently not forgotten neither its destiny nor its history. This is the present coat of arms of Vendée; the flag is half white and thus does not show up well here. The Sacred Heart of Jesus linked with the Immaculate Heart of Mary, surmounted with a royal crown. One wonders why the laïcistes and the politically correct types haven't raised a stink yet. On second thought, one needn't wonder; my first thought after writing that was, "Over my dead body." No doubt there are many who would say the same to any attempts to alter so dear a part of their heritage. Most especially a people who suffered an unacknowledged genocide because of their resistance to the same laïcistes trying to undermine their way of life. 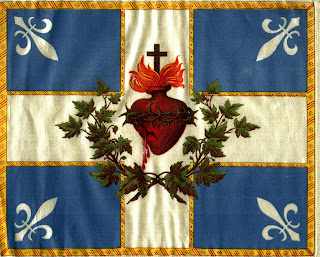 The last image I'll display here is from French Canada, and it is indeed yet another Sacred Heart flag. Legend says that this flag was carried at the victory at Carillon (Fort Ticonderoga) in 1758, though this is highly unlikely. Note the white cross of mediaeval French banners, as well as the fleurs-de-lys. However, rather than the gold fleurs-de-lys of the royal banners, those of this flag are white, as this developed from a flag honouring the Blessed Virgin Mary. This is a variation of the "Carillon flag" designed in 1902 and used unofficially; a version without the Sacred Heart was also flown. The present Québécois flag, the fleurdelisé, was developed from this in 1948; before that the Union Jack flew over the Parliament Building. Also notable here is the distinct Canadianism of the garland of maple leaves, even more notable when one considers that the present maple leaf flag of Canada was not designed until 1965, long after this flag.
Posted by Le Barde Gaulois at 4:55 PM