Last week, while commemorating the Vendée, I reproduced here an image of their banner. Matterhorn, whom I cited in my article on the Romanovs, left a compliment as to its beauty, this immaculate white banner which flapped proudly in the breeze as though it were a small piece of France's baptismal garment while observing both dreadfully the horrors inflicted on the people and the countryside by the infernal columns and proudly those true sons of Catholic France courageously fulfilling their Christian duty. So I decided that tonight I'd write a little series on ancient flags of France. 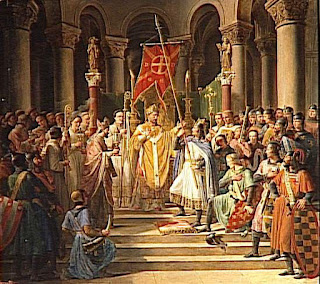 I must first note that there was no real national flag per se until the adoption of the tricouleur during the French Revolution; the flags before that time would either have been the kings' personal banner or the naval ensign. The first of these personal banners was the storied oriflamme, seen here in the hands of Philippe Auguste. This flag is a sacred relic of St. Denis, the patron saint of France, as it is said that its red colour results from it being dipped in the blood of the martyred saint (from whom as well is the war-cry of France, "Montjoie St. Denis!") In times of peace, the oriflamme remained in the reliquary of the abbey of St. Denis. Like many ancient relics, the story of its origin is rather convoluted, and the mediaeval texts do not agree with one another, with many dating it to Charlemagne, considering a gift from the Pope to Charlemagne, and even linking it to the lance of Constantine, part of the reliquary of the Holy Roman/Austro-Hungarian emperors. Whatever the origins of the oriflamme, however, it was seen as a holy gift, and a sure sign of God's grace on the king and the king's men, and always led them into war.

In general usage, however, the three fleurs-de-lys of the king's coat of arms were adopted into what would be nowadays called a national flag. "Azure, three fleurs-de-lys or" is still used in the heraldry of Île-de-France and several other régions and départements of France. I am personally proud to fly this drapeau on eminent occasions.

During and after the Hundred Years' War, however, white flags came to be used more often, in honour of the white flag carried by Jeanne d'Arc (which also contained several fleurs-de-lys and prominently the words "Jhesus Maria." Often used as well was a white cross, usually on the same blue background of the pictured flag. Add a fleur-de-lys to each quarter of that, and you have the flag of Québec, on which more later.
Posted by Le Barde Gaulois at 6:52 PM