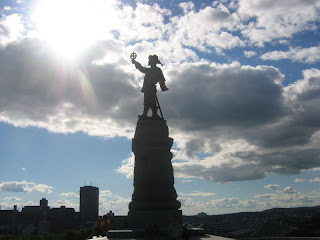 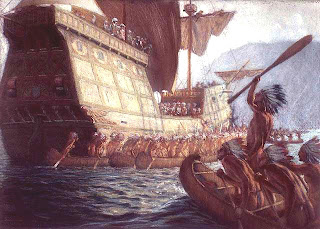 On July 3, 1608, a party led by Samuel de Champlain landed below an imposing height at the place upstream of the Île d'Orléans where the St. Lawrence narrows from a broad estuary to a navigable river. There Champlain built a settlement and began fortifying this strategic location. From here, he set about exploring the area, making alliances and warring with native tribes, and establishing additional habitations elsewhere along the river. This was Québec City, and its establishment was the beginning of the vast French holding known as New France, which stretched from the Gulf of Mexico to Hudson Bay, from Newfoundland to Saskatchewan, containing in their entirety both major inland waterways of North America, the Mississippi and the Great Lakes-St. Lawrence system.

I attended university in Québec, and must encourage you, readers, to visit if you've not yet done so, and see for yourselves that la Nouvelle France still lives to this day.