The soul of England lives in the public house 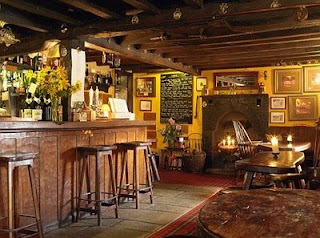 A reflection from The Telegraph, by way of The Monarchist.

I've noted in the past that the Hudson often seems wider than the Atlantic, i.e., that my native New England shares more in common with the westmost parts of Europe than it does with the rest of North America. That said, I love my taverns, those quiet, cozy holes-in-the-wall where I can meet friends and acquaintances over a pint or two of Guinness. And so many of them tend to be closing for a few months and opening under new management and with far less character than before (and with louder music of terrible quality), leaving my circle often with no place to gather comfortably.

As much a travesty as this is, however, these are only commercial establishments that hadn't even been open 20 or 30 years before their transformation. The English pub, on the other hand, is an establishment from time immemorial, part indeed of what makes England England. To see so valuable a part of English culture vanishing in favour of a bland and tawdry homogenization to some sort of suburbia, in which men graze like cattle rather than living as men, should put any defender of tradition--religious, cultural, or otherwise--up in arms. The House of Lords goes, fox-hunting goes, the public house goes; what will be next?

From the comment section here: "When the last inn closes, then go drown your empty selves, for you will have destroyed the last of England." Hilaire Belloc

My thanks to The Monarchist.
Posted by Le Barde Gaulois at 9:53 PM