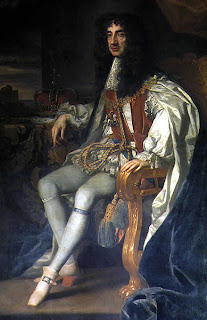 350 years ago today, the republican and Puritanical tyranny that was the Lord-Protectorate came to an end, as Charles II returned to London on his 30th birthday. The Merrie Monarch ruled for a quarter-century, rebuilding those national institutions which the Roundheads had so thoroughly desired to obliterate, allying himself to Louis XIV, and, having long held Catholic sympathies and even having attempted to rescind the penal laws, crossing the Tiber on his deathbed.

God save the King.
Posted by Le Barde Gaulois at 8:43 PM