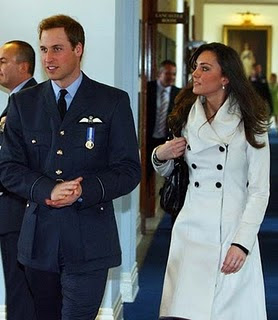 It was announced today that HRH Prince William of Wales and Miss Kate Middleton will marry--an announcement that we have been anticipating for years now. We at Et Lux in Tenebris Lucet are overjoyed to offer our congratulations to the future King and Queen of the United Kingdom, Canada, Australia, and the many other Commonwealth realms.

Sadly, I heard a radio commentator earlier today souring the joy of this event for all of us by talking about what would happen were this couple ever to divorce--this before they are even married. I actually shouted (as though this commentator could actually hear me) that he should mind his impudent tongue and not attempt to sour the joy of the happy couple, of their families (particularly of Her Majesty), and of the world at large with his cynicism. It gravely disappoints me that the pundits should turn so immediately to naysaying but a few hours after Clarence House made the official announcement.

God save the Queen.
Posted by Le Barde Gaulois at 9:27 PM