The Courage of François de Charette 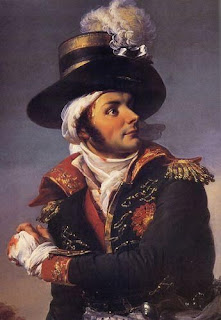 Tea at Trianon refers us to an account of the capture and execution of one of the greatest French Royalist heroes:

The trial took place on the 28th of March. After five hours of examination, during which the Vendean belied not for a single instant the firmness of his character and the nobility of his cause, his judges pronounced upon him sentence of death. He heard it without emotion, and requested only, that as he had fought, so he might die, a Christian, and that he might enjoy the consolations of religion. They sent him the Abbé Guibert, a priest who had taken the oath to the constitution. Before entering his cell, the ecclesiastic begged that the prisoner might be searched. Charette was indignant at the man’s alarm. “Does he think,” cried he, “that the general of the Catholic and royal armies is an assassin? Let him come without fear.”

The Abbé then entered, and said, in a trembling voice, “I am come, monsieur, to offer you the consolations of religion in your unhappy strait.”

“It is for that purpose I sent for you,” replied the Christian hero. “I abhor your principles, I do not regard you as a legitimate minister; but I know that in the hour of death you have power to absolve me. Come, listen to my confession. I do not want your exhortations, I desire absolution.” So saying, he fell on his knees, and, notwithstanding his wounds, remained in that posture for two hours. Then he arose, pardoned, and ready to appear before his God.

At last the fatal moment arrived; the gate of the prison opened, and Charette was led forth to the place of execution….By his calm attitude and noble and resigned bearing, he attracted more attention than all the magnificence and pomp with which his enemies sought to adorn their triumph. As he passed by a certain house in a street indicated by his sister, he humbly bowed his head. An old man clad in black, and holding a white handkerchief, was at a window; it was a Catholic priest, whom the piety of Mademoiselle de Charette had stationed there to give to the warrior, who was going to die for God and the king, the benediction of heaven. None but a few Vendeans who were hidden in the crowd knew why Charette thus inclined his head; but they blessed God for the grace He had accorded to His faithful soldier.

Vive le Roy.
Posted by Le Barde Gaulois at 9:56 AM