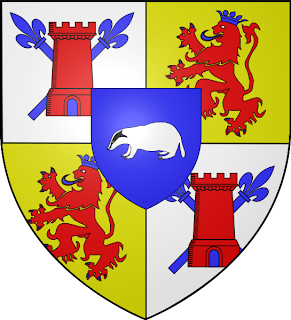 Inspired by The Mad Monarchist's recent post regarding the very lovely Princess Elisabeth von Thurn und Taxis's first book (with a preface by Monsignor Georg Ratzinger), I decided to look a little more closely into the relationship of the Princely House of Thurn und Taxis to the Church and to the Pope.

During this time she [Gloria von Thurn und Taxis] also became very involved with the Catholic Church. In 1991 she made her first visit to Lourdes, where she worked as a volunteer with the sick and dying who go there in hopes of a miraculous cure. On a trip to Florence six years later, she became enthralled with Monsignor Michael Schmitz, the vicar-general of the Institute of Christ the King Sovereign Priest, a conservative Catholic organization dedicated to restoring the Latin Mass. She also cultivated a friendship with the Bavarian-born Cardinal Josef Ratzinger, one of the most powerful figures in the Vatican. In 2000 she moved to Rome, enrolled Prince Albert in a private school there, and with her good friend the Italian princess Alessandra Borghese began hosting liturgical concerts in churches, attended by Cardinal Ratzinger. She arranged to have the famous Regensburg boys' choir, which had been directed by Ratzinger's older brother, Georg, who is also a priest, sing for Pope John Paul II at Castel Gandolfo, the papal summer residence. In April 2005, when the cardinal was elected Pope Benedict XVI, Germans started referring to Princess TNT as the new Pope's best friend.

I encourage you to read the rest of this at Vanity Fair, as it really lays out well much of what a Catholic aristocrat should be.

For an example of Princess Elisabeth's writing on the Church, go here.
Posted by Le Barde Gaulois at 8:51 PM