God Save the Pope 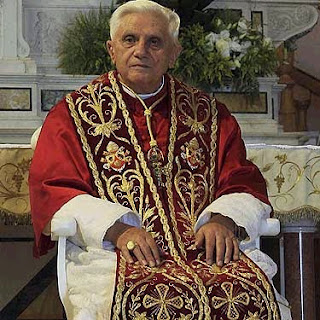 Tomorrow we shall mark five years since the accession of Joseph Ratzinger to the See of St. Peter as His Holiness Pope Benedict XVI. Even had he never been elected, his stellar career in service of God, the Church, and the faithful would have proven him one of the most remarkable churchmen of the past century, from young theologian and luminary of the council to leader of the reaction against the postconciliar radicals to Cardinal-Archbishop of Munich to Prefect of the CDF, close friend and confidant of John Paul II, and seemingly at times "auxiliary pope," if such a thing existed.

Then come the events of March and April 2005: while the long-serving and much-beloved John Paul II faces his eternity, then-Cardinal Ratzinger speaks of the "filth" in the Church, so conveniently forgotten today. Then John Paul dies, and Ratzinger gives the homily at his funeral Mass to likely the largest assembly of global notables ever. After that, before the conclave that would elect him, he delivered his memorable address regarding the "dictatorship of relativism."

I recall that during those few weeks I was reading Introduction to Christianity, as part of the theological scholarship I was then undertaking. Quite impressed, I resolved to write to the author after a new pope had been elected and installed, thinking that he would likely retire to Bavaria. Then came the white smoke and the habemus papam. It was a champagne and cigar night for me.

In this day, however, the disgusting vituperation of much of the press against the Holy Father smacks of the worst of Know-Nothingism. Agitated rabble-rousers speak of a "leering old villain in a frock," painting the Vicar of Christ as an enabler of perverted priests and criminal manager-type bishops who cover their tracks. Tell that to Marcial Maciel.

Of course, all the critics of the Pope and the Church have to offer is the tyranny of hopelessness, lies, materialism, and utilitarianism. Facts don't seem to matter in their new moral panic, their secular inquisition, more vindictive and prejudiced than any tribunal ever convened under ecclesiastical auspices. Thus, against the bitter screeds of these malcontents, I raise my voice, solitary though it may be, in defence of Pope Benedict XVI, a truly humane and thoughtful man, against today's answer to Bastille-stormers.

Therefore, happy anniversary, Holy Father. Run not for fear of the wolves, for upon the Rock whose see you hold, the Lord established His Church, and promised that the gates of hell will not prevail against it. I, for one, shall stand with you, even if it may mean my death. Accept today the gift that I offer within this spiritual bouquet.

I exhort you all, dear readers, offer your gift of prayer to the Pontiff here.