Thoughts Inspired by the Civil Constitution of the Clergy, Part 1 ½ (Murder in the Cathedral) 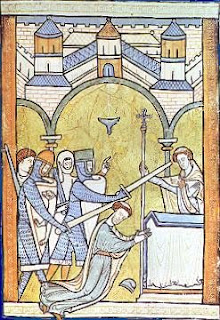 Not exactly Part II yet, as I'm still organizing my thoughts about the foundation of the Holy Roman Empire as a reaction to the Byzantine Iconoclasm, and the Gregorian-Cluniac Reform as an assertion of ecclesiastical primacy in the West, as opposed to the imperial primacy that had clearly taken hold in the East and the rumblings of statist ambition through the Investiture Controversy.

Nevertheless, it is today the feast of St. Thomas Becket, Archbishop of Canterbury, martyred on the (perhaps misunderstood) command of King Henry II of England. Becket began his ecclesiastical life as a loyalist to Henry, but became his enemy when Henry promoted the Constitutions of Clarendon, curbing much of the Church's power in English public life. Becket remains one of the first martyrs to have met his end at the hand of a Catholic potentate.

Rorate Caeli has some excellent lines for reflection from Murder in the Cathedral, a play by the 20th century's finest writer, T.S. Eliot, here.
Posted by Le Barde Gaulois at 8:18 PM